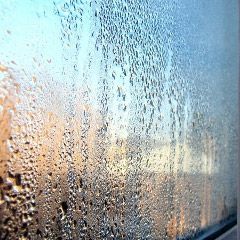 The Causes of Condensation

Normal air contains moisture, which is water vapour and warm air can hold more water vapour than cold air. When moist warm air comes in contact with a cold surface, such as a window, a cold wall or a ceiling, the water laden air can no longer hold the water and droplets form on the cold surface. Technically this is the dew point of water; which we see as condensation.

Condensation usually occurs during the colder months between the end of September and the beginning of May when we all close our windows and doors to keep out the cold draughts; the natural thing to do.

Unfortunately this lack of ventilation and the build up of warm air increases the water vapour in the air and therefore increases the risk of a condensation problem.

In the summer, when we open windows and doors, the problem seems to miraculously disappear!

The Signs Of Condensation

The signs of condensation are usually quite easy to spot.

Black Spot Mould (Aspergillus Niger) usually occurs in areas where there is no, or very little, air circulation such as behind furniture, next to window or door reveals, the junction between floor and wall, and between ceiling and wall, cold ceilings where there is no, or insufficient, insulation and the, far too common, triangular patch in the corner.

Condensation does not always appear in the wettest rooms. For example water produced in the kitchen or bathroom can diffuse through the house into a colder unused bedroom, reach its dew point and condense, producing mould growth which may not be seen for months.

Condensation never used to be this bad

Back in the ‘old days’ homes had ill fitting doors and windows, coal fires drew damp air up and out through the chimney and we didn’t have vinyl wall and floor coverings like those found in homes today. Stale, damp air used to be drawn out of homes and replaced by fresh air (now called draughts!).

In today’s homes we have double glazing, better fitting doors, and cavity and loft insulation; all of which are great for keeping the house nice and warm but create traps for moist air which turn our homes into condensation producing machines.